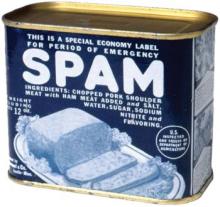 As things on the internet go, not many are worse than spammers. At best they're nuisance, at worst the hardware, cycles and power wasted on dealing with them is causing global warming and pollution at an ever accelerating rate.

I'm most annoyed by the wasted cycles. When I run a web site, I'd like to use the CPU power I pay for to be used to serve (admittedly mediocre) content to people that might get some (questionable) value out of them.

Josh Hesketh (you may know him from such conferences as lca2009) suggested I start a blog meme based on food. The idea is that I post a recipe. The first person to try it and take a photo of the result can then post a recipe of their own, which can be cooked by others, a photo taken, and so on.

The reason for this suggestion was  that I made a second attempt at cooking an interpretation of a dish I saw on an episode of River Cottage years ago. The original is a moroccan inspired pigeon pie, which Hugh Fearnley-Whittingstall cooks after taking out some of his new landlords pigeons with a rifle.

My (rather loose) interpretation of this dish takes the form of large sausage rolls - or sausage logs if you will - and involves no firearms. So, here is the first post in the geek food blog meme :-)