Edit: I've added a link to a lovely zoomable map of IP address allocations to the bottom of this post.

What with the ipcalypse being well and truly upon us I thought I should see how the final IP allocation distribution has ended up. By continent, that is. The data was trivially easy to find, so I stuck it in a spreadsheet and generated a graph: 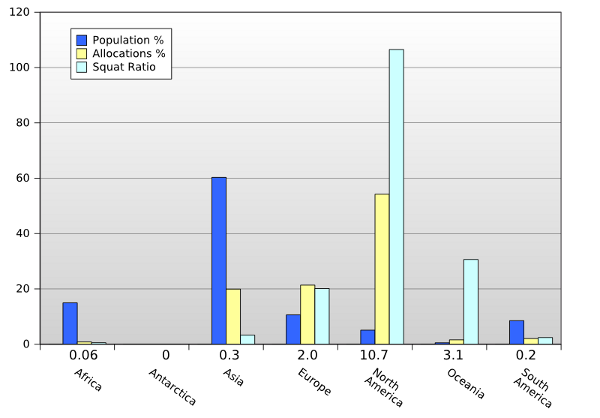 With the established technology companies apparently not very interested, it looks like we need to be looking towards Asia, Africa and South America as the main drivers of IPv6 adoption.

I spent some time writing a few little scrapers after I posted this blog last night and grabbed per-country subnet application and population data as well. The data is not complete and the population scraper was less than optimal, but I did a cursory check and the figures look mainly reasonable now.

Below is the squat ratio per country, for the top 50 countries. I have colour-coded them by geographic region.

The full set of data (for countries with a population of over 1 million people) is attached to the bottom of this blog.

Yay,  Gregor Aisch did a map that shows the relationship between population and IP address densities all over the world. I've included a small version here. You can find the zoomable one at visualizing.org. 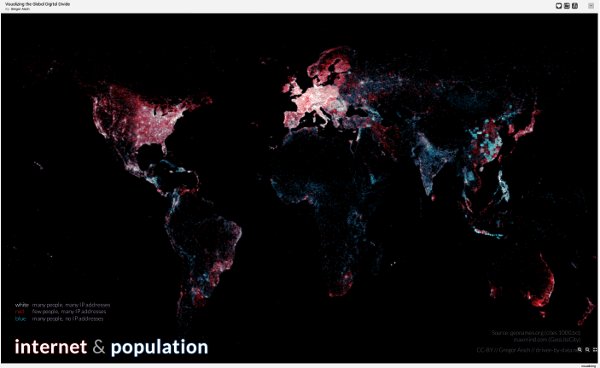 Note that I have no idea whether US military allocations are included in this data.

Well I guess that's the answer then. Redistribute the squatted allocations to APNIC, AfriNIC and LACNIC, and we have solved the IPocalypse. No need for IPv6 now!