Back in 1998 our old trusty HP LaserJet MP5 broke and we replaced it with an HP LaserJet MP6. Over the decades it has provided its humans with reliable Mac OS and Linux printing joy and one of the cats with a warm place to sit in winter and - once - an emergency litter tray.

The cat wee didn't kill it though and after a clean up it provided close to another decade's worth of (slightly smelly) prints.

Sadly it's now running low on toner and it would seem that obtaining new toner cartridges for it is no longer  a matter of simply popping down to OfficeWorks. Time then to go shopping for printers.

We also occasionally have a need to scan documents (I'm looking at you, Westpac) and thought it would be good to win back some office desk space by replacing our separate scanner and printer with an all-in-one unit.

Our requirements were relatively straightforward:

So with a budget of around $700 we quickly realised we could have some, but not all of our wishlist items. The final choice was between some HP units, a Fuji Xerox and a Samsung.

The Fuji Xerox DocuPrint C1190FS was, on paper, the best choice. It has a gigantic monthly duty cycle and although its toner cartridges are not cheap, they are large and can print way more pages than the competition. Sadly it appears to just not have Linux support. At all. So with only Linux machines in the office it's a no-go for us.

A similar unit that does have (some) Linux support was the Samsung CLX-6220FX. However, various reviews noted that the software is apparently quite awful and somewhat buggy. Having had a Samsung mobile phone with a UI full of typo3s we decided to take those reviews at face value and avoid this unit.

The other units were all Hewlett-Packard, the CM1415NF, M1536, and M2727. The latter was neither colour nor duplex, so it got dropped off the shortlist early on.

Nearly all Hewlett-Packard printers and multi-function units are supported under Linux. This is usually by way of the HPLIP software suite. Knowing that the manufacturer actively supports open source made it really easy to decide we wanted an HP unit.

Unfortunately the HP unit that does both colour and duplex was pretty much twice the price of the competitors products and there was not really any way we could afford that expenditure. So the choice was between a colour printer or one with a duplexer.

We don't often need to print double-sided documents, but if we do we can always re-insert them into the printer to print the reverse side and still get fairly decent looking output. Using crayons to colour in a properly duplexed  monochrome print just doesn't give the same effect, though.

So in the end, we decided to go colour over duplex and the unit we ended up buying was the HP CM1415NF. 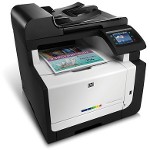 This unit is reasonably new, so as per usual if you run a slightly older Linux distribution it may not necessarily be supported out of the box. Happily though the HPLIP tarball download contains a hp-laserjet_cm1415fn-pcl3.ppd.gz PPD file, so it's supported in a more recent version of the software than what's included on my Ubuntu 10.04 machine.

Dropping the debian build scripts from the Ubuntu-bundled sources into the downloaded new tarball sources and then building seems to work fine. I installed my shiny new hplip-3.11.1 packages and was able to simply add the printer via the printer dialogs. A test print confirms it works - and works in colour.

Although (x)sane can see the scanner though the hpaio module, it seems a few non-free libraries are required in order to actually be able to use the scanner. These are not included in the tarball or hplip package, but these do come with a GUI utility that allows you to download and install the modules in the right place.

After you install hplip, simply run the hp-plugin utility to read and agree to the license, then download and install the modules. With this done, the scanner just works from within Gimp and via the xsane utility.

I think the next step in getting the printy thingy singing - is some colour management jiggery-pokery.

I've always relied upon Brother; they have good Linux support. Their build quality is not the best, but the running costs are. The 9420CDN is $1300 though. http://www.brother.com.au/products/multi-function_centres/colour_laser-l...

One obvious web search lead to this which claims explicit support:
http://samuderajaya.com/fuji-xerox/docuprint-c1190fs/prod_35.html

Then a go ogle of docuprint c1190fs +cups +ppd had its first link to
http://www.fujixeroxprinters.com.au/en/support/Downloads.aspx?product=8841, which after a brief search using their tool said also that there was a linux pack. I haven't tried downloading to see whether there's a usable ppd file in there though. If there was, it would be good to submit that to cups upstream.

We have a fuji xerox document centre 400 (according to my ppd file. I can't actually remember what its full title is) that is more or less supported (of course, my boss bought it without a second thought about whether it would work with all of our machines. I had to make it work after the fact, so we were lucky). Getting the ppd files wasn't terribly easy though. I won't get time to submit it to cups upstream before I leave.

Yes, I don't know why I didn't find that when I did a search... just downloaded it to have a look.

It contains an RPM with a PPD file and a DLUT file and source code for a cups filter. I don't know whether the scanner works with sane, there's not an included driver and it's not listed at http://www.sane-project.org/sane-mfgs.html

So despite failing a basic Google search, I think I still made the right choice ;-)

I recently switched my (free) Canon MP800 bubblejet printer to Rihac's continuous-flow heads ( http://www.rihac.com.au/mp800-ciss-p-202.html ) which has reduced the per-page cost from over 15c to under 3c, plus a friend is investigating other compatible inks, which should bring it below 2c per page - which is laser territory.

This thing prints, scans, copies, prints photos from memory cards (all by itself, no PC required), plus it double-sides, prints directly onto discs (CD/DVD) & CUPS is entirely happy with it. I struggle to find a reason to own a laser printer. (-:

Recently had to get black toner for it - went to 3 officeworks before finding one that had it in stock.

What would be really nice... but of course is not in the interests of printer makers... would be if they could standardise on consumables... even if just the same manufacturer would use the same damn cartridge across all A4 printer models for instance...

I used to own a HP LaserJet MP6 too and it was just as durable as you say! It was the oldest printer in my office for years and I never thought about getting a new one because I got it when I start my business. Eventually I had to go for an outside catalog printing service, it started to fail me more and more often, but I still own it!

I suppose there are much fewer mechanical moving parts, which is a common area of breakdown for today's inkjets. I'd look at that giant print head with the multiple ink ports to be a point of failure, and possibly high initial cost. Probably the viability of this technology will depend on how cheap, robust and maintainable that print head is.

I've always relied upon Brother; they have good Linux support. Their build quality is not the best, but the running costs are.

I had my own problems with linux a few years ago. It's not really user friendly unless you take the time to learn a bit of it. I also have a HP printer so thanks a lot for the tips you provided.

I accidentally bought the Samsung crap, not having read this post beforehand. Before I mess up again: would you buiy the HP again? Does it still live up to your expectations?